Visions of The Hereafter - Visions of Heaven, Hell and Purgatory (ALRN033) 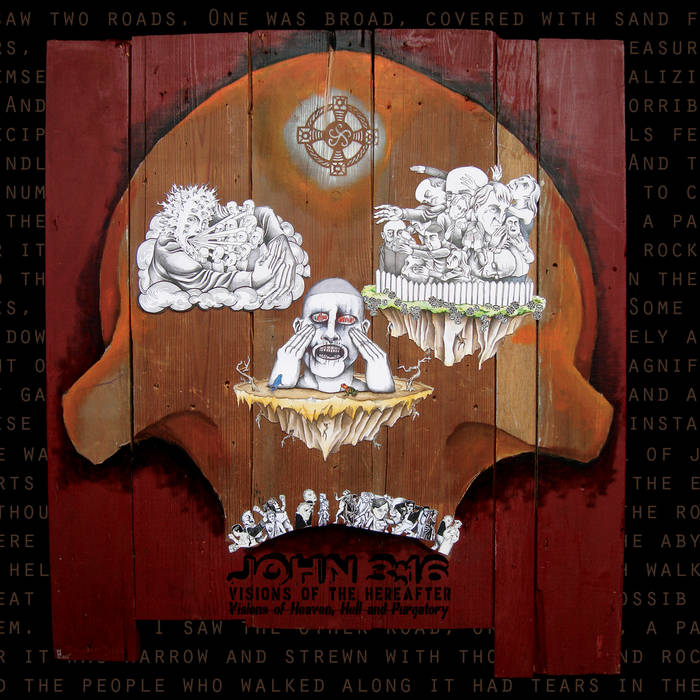 Tracklist:
1. The Ninth Circle
2. Throne of God / Angel of the Lord
3. Abyss of Hell / Clouds of Fire
4. Ascent of the Blessed (To the Heavenly Paradise)
5. God's Holy Fire
6. Star of the Sea / Guardian Angel
7. The Inner Life of God / The Father, The Son and the Holy Spirit
8. Through Fire and Through Water
9. Fall of the Damned (Into Hell)
10. The Holy Mountain (Bonus track)

Philippe Gerber/JOHN 3:16 has played more than 500 shows in the UK and Europe with the London based band Heat From a DeadStar (2004 to 2009). HFADS was the first non-US act to sign a record deal with the Boston-based label Ace of Hearts Records (owned by Rick Harte, producer of Mission of Burma, Lyres, The Infliktors, etc). The trio released its first album ‘Seven Rays of The Sun’ in 2008. This album has been described as “abrasive, catchy, post-Wire post-punk” and “a Burma-esque adrenalin rush of banging drums, rumble bass and slashing guitars” (Big Take Over Magazine, USA).

JOHN 3:16 was started in 2007, as a studio-only project but after HFADS disbanded in 2010, JOHN 3:16 became the official live act of Philippe Gerber. The 5-track EP ‘Sinners in the Hands of an Angry God’ (2011) was critically acclaimed and presented the JOHN 3:16’s newly musical direction “synthesizing many different styles and genres such as those designed as psychedelic-electronic analog circuit no-wave, industrial, ambient, shoegaze, pop, trip-hop...” (Terapija Webzine, Croatia).

‘Visions of the Hereafter - Visions of Heaven, Hell and Purgatory’ is the first full length of JOHN 3:16 and is to be released via Alrealon Musique on October 22, 2012. The nine tracks were recorded at the Alrealon Studio/Laboratory(76). Carolyn O’Neill (Director of the Logan Square New Music Ensemble) co-wrote the track ‘Abyss of Hell/Clouds of Fire’ and William Schaff (Okkervil River, Songs: Ohia, Godspeed You! Black Emperor...) designed the original artwork.

'...It is a beautiful and moving experience...'
Estelle Washington / Sludge Factory (Australia)
sludgefactory.com.au/john-316-visions-hereaftervisions-heaven-hell-and-purgatory-cd-review


'...“Visions Of The Hereafter – Visions Of Heaven, Hell And Purgatory” is a successful debut coming out of the hands of a creative and genius musician who has been maybe touched by the hand of God....'
Stéphane Froidcoeur / Side Line Magazine (Belgium)
www.side-line.com/reviews_comments.php?id=48966_0_17_0_C

"...There's a certain shoegazing aspect of the record looking to send the listener upward, tugging against the sombre inward reflection to haul the listener toward the skies on waves of distorted melody. Quite how the album defies physics and achieves both simultaneously is perplexing to say the least..."
Jack Chuter / Rock-A-Rolla (UK)
rock-a-rolla.com/main/?p=3756


"…Pleasant shivers of New Order and The Cure greet listeners as wave upon wave of rippled 80s riffs swerve through the speakers. On their own, these melodic layers work incredibly well; they produce a feeling of pleasant nostalgia, while wearing a rakish hat… "
A Closer Listen (USA)

"Eerie drone/ambience made up of drawn-out string arrangements accented by minimalist electronics, lofty vocal chants, and industrial noise. The songs advance enough to draw comparisons to post-rock and keep the listener engaged, while also accomplishing the envelopment of the drone."
WRUV Reviews (USA)

"…Overall, John 3:16 keeps pushing the boundaries of his music and delivers a very well-crafted and free-flowing release that is pure atmospheric bliss. For the duration of the 50 minutes of music presented in this album, we felt like floating in space (no need for drugs on this one) thanks to the dreamy atmosphere created. Packed in an excellent digipack, this release is totally worth your money if you are looking for experimental music that puts a high emphasis on atmosphere and flow of the songs…"
Infernal Masquerade (USA)

If you like Visions of The Hereafter - Visions of Heaven, Hell and Purgatory (ALRN033), you may also like: