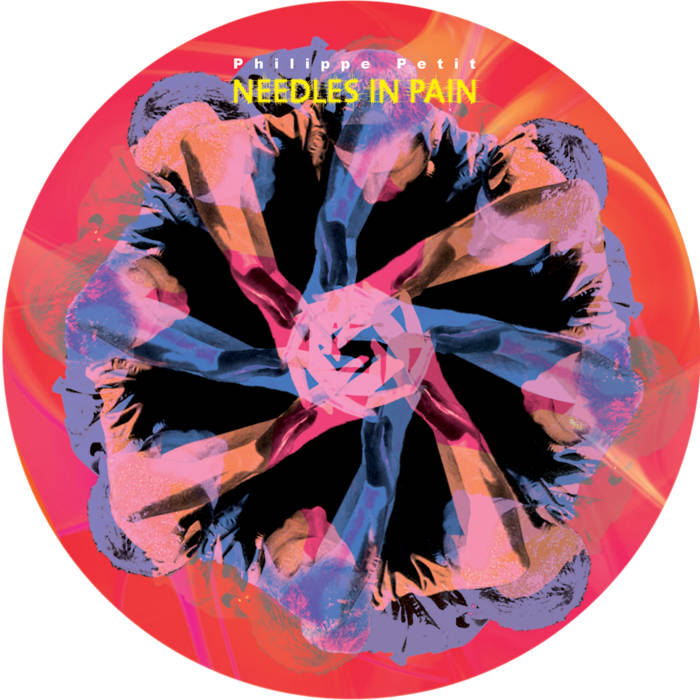 NEEDLES IN PAIN is a "symphony for turntables" executed live using 3 turntables + 1 extra tonearm built for Philippe and allowing to catch 2 different sounds from the same "prepaired" vinyl.

It was recorded in 2009 @ FIME festival. For the first time Philippe is releasing a record whose music comes only from his turntablism, and that hopefully will transmit how he enjoys performing and entertaining his audience.

Feel free to have a look:
dailymotion.com/video/xbrmtd_philippe-petit-live-fime-festival-n_music

Indeed the basis for "Needles In Pain" comes from unique vinyl units which Philippe Petit uses during his musical sets. Filled with field recordings, textures which have mutated with each playing, creating an organic maturation in sound that time slowly developped... Textures gradually changed with each playing taking advantage of the patina of age, elaborating an alteration in the sound. An echo of the past to which Petit adds more and more vinyls' warm cracklings...

Petit started DJing in 1983 thus moving vinyls has become throughout the years a natural action for him, then in 1993 he went to see Christian Marclay and Otomo Yoshihide perform their "War of the turntables" in Marseille MAC (Contemporary Art Museum). A fantastic show which led to his releasing some music by Yoshihide's mythical Ground Zero on his Erase -yer-Head/Pandemonium Rdz. Those 90s saw turntablisms become the new big thing and so many started to immitate Yoshihide and Marclay who had already accomplished anything which could be done to use a turntable or some vinyls in a different way.

It took years of DJing and juxtaposing-processing sources for Philippe to manage to develop another technique and emerge as a different voice for turntablisms. Firstly in having his own sound-music pressed on unique vinyls which he could use onstage. Secondly, adding extra tonearm with separate connection to the mixer, allowing to mix in another source from a record and play with it. BUT even more than that, the way he managed to stay different was to actually improvise on the spur of the moment, assaulting turntables to take advantage of the vinyl material to fondle released sounds, raking the needle across the record's grooves, rubbing their stylus on paper, cardboard, metal to process unusual noises and textures… Headbutting... Keeping it physical: DANCING !!! Which obviously guaranteed a personal move, something unique to be experienced live...

"...And highly entertaining it is, this pair of thick, intricate tracks, in which the techniques may be obscured, but the creativity is not. Unidentifiable samples gather and swirl like hordes of locusts, accompanied by windshield wipers on dry windows..."
(A Closer Listen, 2013)

"...’first movement’ and ’second movement’ the former a softly alluring and delicately scratched ice sculptured mosaic tenderly waking, stretching and yawning to a thawing twilight glow trimmed in a sighing melancholia and distant wistfulness while the latter more organic in presentation crackles, clicks, jumps and warps to a locked groove disorientation wherein the minutiae of the sound sample is compressed, expanded and collapsed into a woozy looping collage..."
(Mark Barton/The Sunday Experience, 2013)